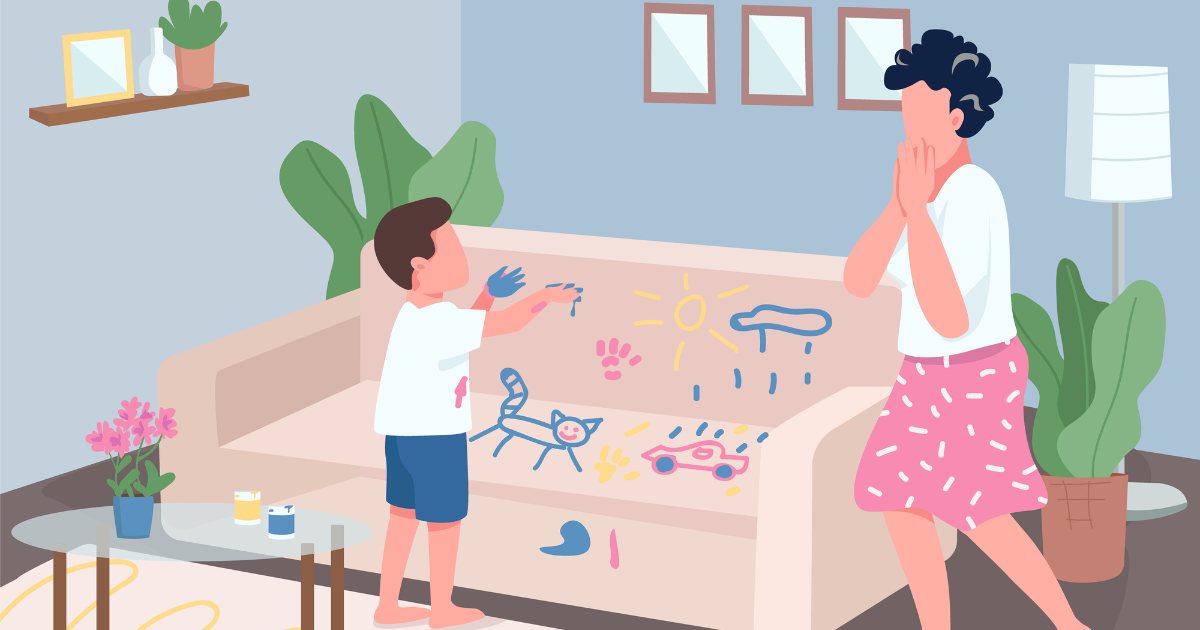 While my 11 year old daughter was in the bath she decided she needed to fart but more came out than she had previously anticipated. She called for our help and we had to help her clean up. At least we can laugh about it now!

“He decided to paint a mural on our living room.”

My son is still the creator. When he was younger, he loved to paint and draw – which my then husband and I totally agreed with. What didn’t sit well with us was when he used our playroom living room as a canvas! Thank goodness it was a second hand that wasn’t in the main living area, but we weren’t impressed.

When I confronted him and asked him why the hell did you draw on the couch, he looked at me so innocently and said, “I thought you’d like my drawing.”

“She accidentally Uberated a pizza at our house.”

My one year old daughter is clearly good at delivering and ordering food because one morning while we were watching a cartoon she was playing with my phone. I only found out that she had accidentally ordered pizza delivery through Uber Eats when the person showed up at our door at 9am.

“My toddler thought the purse was a potty.”

My toddler thought a purse on the floor at a festival looked like a pot. I was busy feeding her younger sister and before I could stop her; he had grass in the bag. Like in… someone else’s bag. I gave the lady all the money in my purse to replace it, apologized profusely and left!

“My son fell off the table and broke his teeth.”

It certainly wasn’t funny back then, but we look back on it now and shake our heads. My husband took care of the children – all four. He was feeding one of the younger ones when our son Toby decided it would be a good idea to try a backflip from our dining room table. He failed miserably.

He lost his milk teeth and had to be operated on. Luckily he was fine other than that, but now at least he has nice teeth – we always tell him every time he goes out at night with his friends never to step on any table.

“I sent my kids to school in their pajamas…on the wrong day.”

The elementary school that my two children attend organizes a mufti pajama day once a term. So one Wednesday, I took them to school, and they were wearing their best flannel pajamas.

Got a call 10 minutes later from the two crying saying it was the wrong day. Pajama day was Thursday. Oops.

“They had drawn lipstick all over themselves.”

I came home from a hard day at work, only to find my kids running around the house, full of copious amounts of red cordial, all covered in my red lipstick – which they had clearly taken from my makeup bag . I then found our babysitter on the phone in the living room, oblivious to everything my children had been up to that afternoon.

Do you have a fun parenting story? Share it in the comments!

Protecting animals from the risks associated with hot weather – L’Observateur