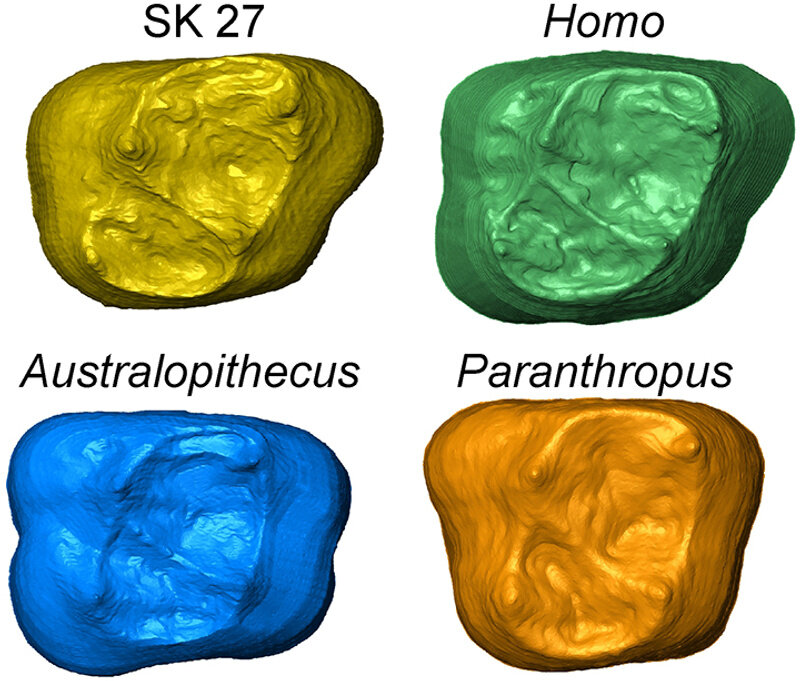 The new study, published in the journal Proceedings of the National Academy of Sciencesdemonstrates that among the 23 specimens analyzed and potentially representing early Homo from southern Africa between 2.5 and 1.4 million years ago, a maximum of seven of them actually represent Homo, while the others belong more probably Australopithecines or Paranthropus.

These findings have direct implications for our interpretations of hominin diversity, paleobiology, and ultimately our understanding of human evolution.

The origins and biogeographical diversity of the first members of the genus Homo remain a major topic in paleoanthropology.

These results underline the importance of correctly identifying the taxon to which a fossil belongs. Otherwise, any mistaken attribution to the genus Homo when it actually represents Australopithecus or Paranthropus would completely distort interpretations of paleobiological aspects, such as feeding behavior, ecological interactions, hominid paleodiversity, adaptations and relationships. scalable.

Correctly identifying the first representatives of our genus Homo is crucial to understanding when, where and how our genus emerged on the African continent. However, there is no consensus definition of the genus Homo, leading to endless debates regarding the identification of early Homo.

In southern Africa, remains of early Homo have been described in several sites (Sterkfontein, Swartkrans, Kromdraai, Drimolen), in geological levels dated between 2.5 and 1.4 million years. Some of these specimens were also considered to potentially represent Australopithecines and/or Paranthropes, complicating the taxonomic attribution of these fossils. These uncertainties preclude any reliable assessment of hominid paleodiversity, as well as the evolutionary relationships between Homo, Australopithecus and Paranthropus, possibly obscuring the conditions for the emergence of Homo.

Dr. Renaud Joannes-Boyau was part of an international team of researchers whose comprehensive review of Lower Pleistocene dental remains from southern Africa attributed to early Homo showed that many specimens were misattributed.

This study is based on geometric morphometric analyzes of the enamel-dentin junction (Figure 1), an internal tooth structure that has been shown to be a reliable taxonomic proxy for distinguishing hominid species down to the subspecies level. .

“It’s exciting when new techniques, such as microtomography, allow us to extract new and valuable information from fossils that have been in our collections for decades,” said University Professor Matthew Skinner. of Kent.

All other specimens more likely represent Australopithecines or Paranthropes.

One of the most iconic remains of South African paleoanthropology is the SK 15 mandible (Figure 2) which has been attributed to Homo erectus for decades and shown in this study to be more likely related to Paranthropus.

“These quantitative analyzes of the shape of the enamel-dentin junction allowed us to objectively reevaluate the taxonomy of a number of putative Homo specimens, while revealing a greater hominin paleodiversity than previously accepted,” said the Dr Clément Zanolli, CNRS researcher at the University of Bordeaux.

In particular, SKX 268 displays a weaning signal comparable to that reported in Australopithecines and different from what is known in Homo.

“The lactation behavior of early hominins, which has been put forward as a versatile adaptive trait for surviving difficult ecological niches, may be one of the key features distinguishing Homo from other hominins,” said Dr Renaud Joannes-Boyau from Southern Cross University.

Dr Joannes-Boyau explained that the confusion around the three genera is due to the fact that Homo, Australopithecus and Paranthropus all lived in the same region of southern Africa at the same time.

“Australopithecus is probably the ancestor of Homo and Paranthropus,” he said.

“The variation is very minimal between the two, but there are significant changes happening with Homo that make us so successful that we’ve evolved to out-compete and out-compete all the different species.

“Geochemical analysis of anatomy indicates that there is nothing fundamentally different between the genders, so it must be something in Homo’s behavior that allowed early humans to move forward.”

The first human ancestors a million years older than thought

Ridiculously expensive apps currently being sold on the App Store