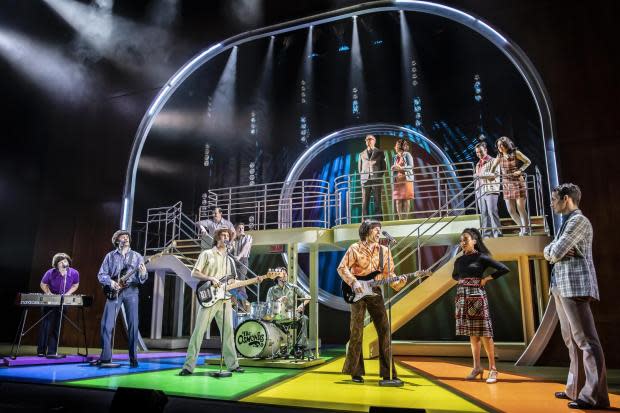 The Osmonds, however, were not, save for the somewhat bizarre presence of the exciting long-haired Lover of nine-year-old Little Jimmy from Liverpool in 11-year-old Hutch’s Christmas stocking , in 1972. Today, it would pass for a guilty pleasure. Back then, well, the Osmonds were everywhere. Osmondmania, as it was called.

“We want the Osmonds,” the chant read. “We want Les Osmonds”. Ah, but do we still want the Osmonds? According to Tuesday night’s hearing, there are still many who still do: mostly middle-aged women who have been taken back to all their yesterdays, whether they’re waving Osmonds flags rescued from the attic or hearts beat again when Joseph Peacock donned Donny’s trademark peaked cap for Puppy Love.

This was when this show really took off: just like when younger brother Donny first became the number one pin-up girl. And they still call it puppy love on August 2, 2022.

The Osmonds: A New Musical is the story of the Osmonds, or rather it’s the story of Jay Osmond, filtered from his 2010 autobiography, Stages, now on stage as the family drummer’s family drama. Jay, played so beautifully by Alex Lodge, is the narrator, the guide, through the lives of the American boy band from Ogden, Utah, from their baby teeth days to singing barbershop on The Andy Williams Show (the days Jay once sat on Disney’s Walt knee).

Faith first, then family, then career was the motto of these clear and clean boys, as adopted by their disciplinarian father George (Charlie Allen), who controlled the music-making operation of the Mormon family with military precision. The boys called him sir, greeted him, showed respect at all times, to everyone, just like Elvis had done in all his early black-and-white interviews.

Faith, first. Well, “Mormon” has only been verified once; not the “Church of Latter-day Saints” at all, but there were references to “mission” and “faith.” It was a polite and respectful musical, showing the influence of their faith without hammering home their Mormon roots.

Father George Osmond, who always wears the same costume to emphasize his unchanging ways, imposes his will. Mother Olive (Nicola Bryan) is more comforting, a listening ear, but she too preaches the collective good, the cause of faith and family.

What Julian Bigg and director Shaun Kerrison’s book does for this celebration of Osmond is show what makes The Osmonds unique: a family band of boys, who could all sing lead vocals, play any how many instruments, write their own songs and keep adding new members, from Donny to country-loving sister Marie (Georgia Lennon) and, yes, Little Jimmy (Austin Riley) with his five-week top.

It doesn’t matter who sings the lead vocal, as long as it’s an Osmond, that was the other family motto, but as with all bands, individual needs gradually percolate through the shiny surface. Merrill (Ryan Anderson) begins to struggle with his sanity; Jay talks about always being stuck in the middle, the drummer holding things together from the back; Wayne (Danny Nattrass) tends to be the one in the back seat until the darkness consumes him.

The brothers, suddenly supposed to be Donny’s backing band and playing second fiddle on the Donny & Marie TV shows, consider his hit songs like light foam.

Alan (Jamie Chatterton), chosen by his father to be the boss, goes to the point – in tandem with Merrill – of plunging the family into financial crisis with a disastrous business decision.

Jay’s story and Bigg and Kerrison’s stage adaptation strikes the right balance between nostalgia and exhilaration, knowing humor and frankness, full of concert details, TV studios and recording sessions, complete by an off-stage voice cameo from Elvis Presley, offering advice to the brothers on their next step and fashion tips. Letters sent to Jay by Wendy (Katy Hards), his number one Manchester fan, weave a British thread through history to amusing effect.

If this seems like a stripped-down version, then this is the only band for which it’s entirely warranted. It’s not about sex, drugs and rock’n’roll, unlike Marc Bolan’s jukebox musicals The Kinks and The Small Faces that have come through York before.

Rather, it’s a tale of many highs, an almighty crash, and a resurrection of reunion in the 2008 finale. with immaculate harmonies and matching outfits, then One Bad Apple, Let Me In, Marie’s Paper Roses, et al.

The songs feed in and out of the story, especially for Merrill and Wayne’s frustrations; Lodge’s Jay breaks through the theater’s fourth wall with rosy charm, and the directors’ performances increase as the story progresses. Amazing singers, good movers, just as skilful in their dialogue, they honor the Osmonds to the fullest. So did the set design by Lucy Osborne, the wigs, hair and makeup by Sam Cox, the cast and the band.

Love Me For A Reason and Crazy Horses are retained, perfectly judged to bring the standing ovation. If you’ve never been a fan or found a lot of the songs too sweet, nothing can change that, but The Osmonds: A New Musical will once again delight all “Osmondmania” followers and may well attract new ones. fans too.

Jay Osmond, pictured in York this week with the show’s directors, will be there again tonight, watching his family’s story unfold once more, still minding business Faith, family, career, discipline, dedication and no bad apples.