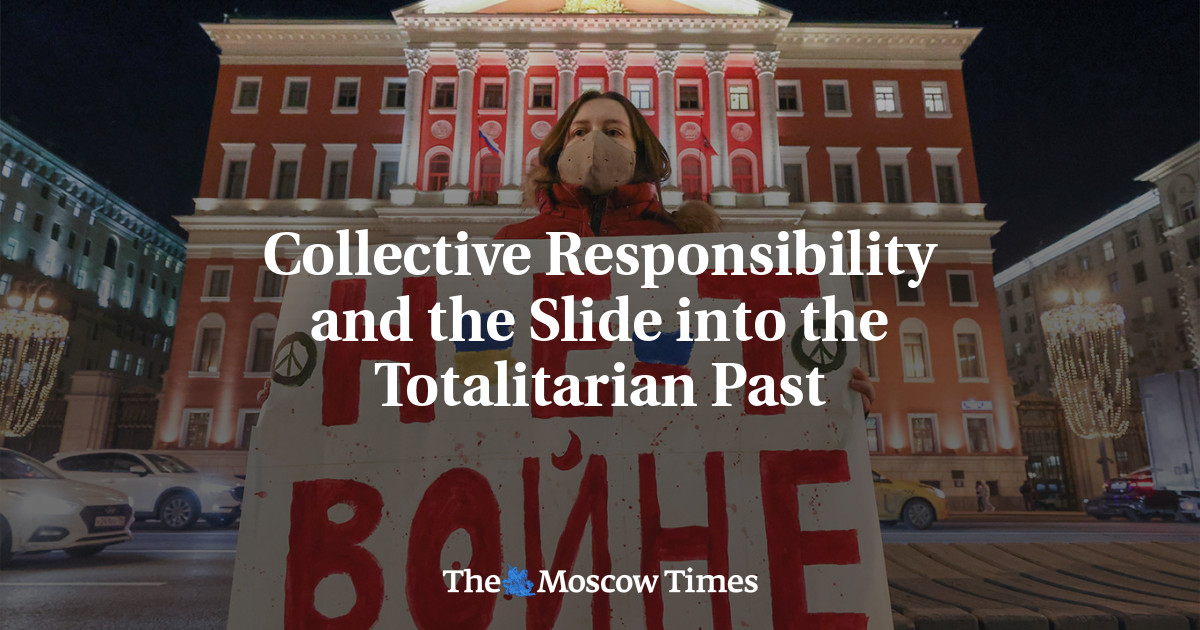 Collective responsibility and sliding into the totalitarian past

As Russia persists in its brutal war against Ukraine, the question of collective responsibility arises – the responsibility of Russians for the atrocities that are perpetrated in their name and name. The ostensibly philosophical question acquired practical connotations in view of the proposal to ban all Russians from coming to Europe, all as part of a policy of collective punishment. Are the “Russians” then responsible?

“Collective responsibility” is a problematic concept rooted in the totalitarian ideologies of the 20th century. She argues that a member of a community, broadly defined, can be held responsible for the collective “sins” (however interpreted) of a particular community, and must therefore bear the consequences.

Communists and Nazis in their time assigned collective responsibility to entire categories of people. Stalin triggered the Holodomor and ordered murder or mass deportations – of Poles, Balts, Chechens, Crimean Tartars, Koreans (among others). Hitler targeted Jews and Roma communities, as well as homosexuals and other collective categories. Stalin exterminated entire “classes” of people (wealthy peasants and other “enemies of the people”), a practice later adopted by other genocidal tyrants, including Mao Zedong and Pol Pot. The Germans, in turn, were given collective responsibility after World War II, and expelled en masse from the territories Germany had lost in defeat. In short, the notion of “collective responsibility” has a dubious lineage.

But let us leave these totalitarian legacies for the moment. Aren’t there philosophical underpinnings that give rise to collective responsibility? One can easily think of examples. A country with free and fair elections can commit an abominable crime, such as starting an unprovoked war against another country, resulting in the death of hundreds of thousands of people. We can reasonably argue that in such cases, those who voted for the government that then committed crimes can be held collectively responsible for those crimes, if not in a legal sense, at least perhaps in a moral sense.

Let’s just say for a second that all Americans are “collectively” responsible for the Vietnam War or the Iraq War. The argument is divisive, not only because many Americans were against and actively opposed both wars, but also because there were other non-American actors who were also responsible for those conflicts, which he whether they are communist radicals or Saddam’s henchmen. In such cases, the attribution of “collective responsibility” muddies the waters by shifting the burden from the shoulders of those who were individually responsible for making the decisions that led to the war, or killing civilians, or dissemination of hate propaganda.

At least in democratic societies, one can plausibly argue for collective accountability based on free and fair electoral results. Things get complicated in tyrannies that do not allow free and fair elections. Take Russia, which has not had free and fair elections in decades, which punishes dissent with prison terms and which controls media discourse by denying citizens access to other sources of information. Can the citizens of a country like this be held collectively responsible for the actions of a government that does not represent them and thus incur collective punishment? While this may be emotionally appealing, it’s hard to see the philosophical basis for such responsibility.

Russia castigates Zelensky’s call to exclude Russians from the West

This argument can be countered – as many have – by invoking the idea that “more can always be done” against even a tyrannical government: protest, sabotage, go to jail, even flee the country. Such arguments stand out best when made by members of the community in question. The minimum threshold for pontificating about the virtues of opposing tyrants should be a proven record of a first-hand encounter with the police baton in the back and a kick in the teeth.

But the question is broader; and it goes to the very heart of our attachments to arbitrarily chosen communities which we then seek out and blame for the ills that suit us. For if the Russians could always have done something else to stop Putin’s brutalities, then so could other Europeans – by denying Russian energy supplies. Brave small acts of disobedience, such as turning down the thermostat or walking to work, could go a long way in cutting Putin’s finances, putting pressure on him to abstain.

The average European probably has as much ability to topple Putin and his cronies as the average Russian (that is, not much), but can do at least as much, and probably more than the average Russian, to weaken his grip on power by denying it the hard currency it desperately needs to run its repressive regime. And yet, for years, Europe rushed to indulge in Russian oil and gas and graciously helped launder the Kremlin’s dirty money, naturally without ever feeling a sense of “collective responsibility” for having fed Putin.

The minimum threshold for pontificating about the virtues of opposing tyrants should be a proven record of a first-hand encounter with the police baton in the back and a kick in the teeth.

Now, however, some Europeans have discovered the joys of shifting Putin’s “collective responsibility” onto “the Russians”, including the thousands and thousands of Russian activists who dared to disagree, who were beaten and imprisoned, the many who are still in prison, and the members of politically disadvantaged national minorities, and of course children too, and even unborn children. The comforting joy of collective responsibility is that it can be imposed on anyone despite what they have personally done or failed to do.

In arguing against “collective responsibility,” one should not overlook the very real individual responsibility – both moral and legal – of the perpetrators of specific crimes. Individuals must be held accountable for their actions because they can choose: murder, rape, loot, or protest, go to jail, as a last resort, flee. The idea of ​​individual responsibility for one’s own actions is at the very heart of Western liberalism.

Many Russians shamefully support Putin’s hideous aggression in Ukraine – directly, by waging war, and indirectly, for example by refusing to condemn Russia, or by maintaining a false detachment as if the war was none of their business. I will judge them individually and let myself be judged too, but only to the extent that they and I are personally responsible for specific crimes and wrongdoings.

The question is simple: do I and you – not the vague “collective” you, but the very personal you – oppose a crime by choice? What are we doing to stop it? And aren’t we looking for the “others” to blame for what starts and ends right with both of us?

If your answer to the above question is “But the Russians!” then you have already set foot on the slippery slope towards our common totalitarian past.

Opinions expressed in opinion pieces do not necessarily reflect the position of The Moscow Times.

Why do we need Binicare water flosser and sonic electric toothbrush in daily dental care?