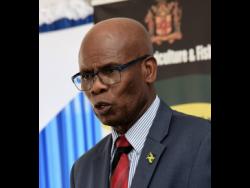 As an indicator of nutritional status, Jamaicans do not drink enough milk to lead normal, healthy lives. Locally, milk consumption per capita remains at 105 milliliters per day. This is a third of the average for Latin America and the Caribbean; one-fifth of the average for developed countries; slightly lower than the average for other developing countries; and half of the World Health Organization minimum requirement.

And it is also a matter of serious concern for Custos Rotulorum of Kingston Steadman Fuller, who publicly voiced his concerns about this nutritional deficit, during the World Milk Day celebration on Wednesday at Tulloch Primary School in Bog. Walk, St Catherine.

“If we consider the importance of milk, from birth, we recognize that there is still a lot to be done. The issue must be addressed quickly and strategically for the benefit of our babies and children and ultimately the future of our country,” he told dairy industry players, including leaders of the Jamaica Dairy Development Board (JDDB).

“Healthy bones and teeth start with an adequate supply of calcium and minerals. Cow’s milk is the main source of these ingredients…. I hope that in the interest of our nation, we find a way to bring milk back to the top of our curriculum,” said Fuller, school board chairman and alumnus of Tulloch Elementary School.

In 2012, the livestock sector contributed J$10.346 billion to the economy, or 1% of gross domestic production. Local dairy products, mainly fresh processed milk, accounted for about 10 percent of local dairy consumption, with the remaining 90 percent (fluid milk equivalent) being met by imports. Local milk production peaked at 38.8 million liters in 1992 and has continued to decline since, except for the period 1996-1999, to 12 million liters in 2013 and production has varied between 12 and 13 million liters since 2010.

Fuller continued, “I realize that we won’t be able to find all the solutions here, but I hope that as we expand the scope of these discussions, as we engage as we do today, we come up with some workable ideas to put us in a better position to meet the international standards of two liters of milk per person.

“So in terms of where we are, we have a lot of work to do and so the dairy board has embarked on a program with farmers which we believe will help us turn the corner. We only produce about 15% of our needs and part of the work of the dairy board this time around working with the farmers in the area, and it’s been a very long road and it’s been a very hard struggle and intensive,” he admitted.

Describing the dairy industry as an industry that is on the verge of significant growth, Dr. Deslandes highlighted some of the obstacles.

The liposuction market size will register a CAGR of 6.8%, exceeding