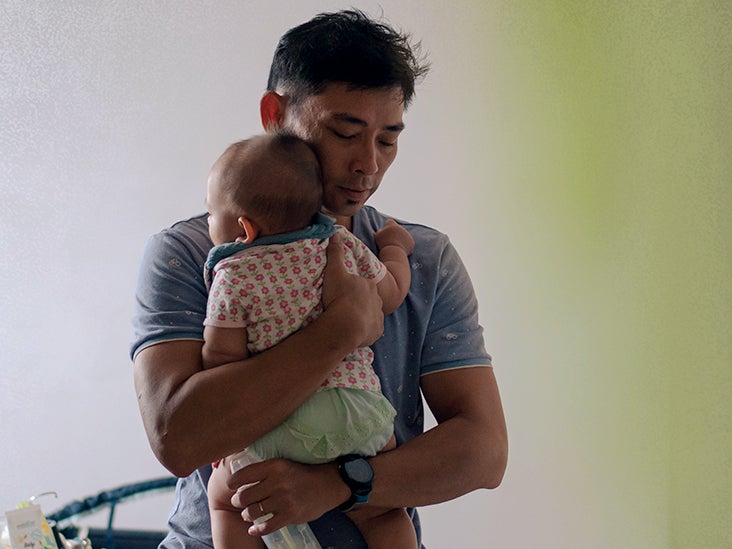 Pediatric gastroesophageal reflux disease (GERD) is a condition in which stomach acid drains into the esophagus of an infant or child, causing what is commonly known as heartburn. Left untreated, this acid reflux can irritate and damage the esophageal lining.

It is common for stomach acid to leak into the esophagus of infants, resulting in frequent spitting and vomiting. However, if the frequency exceeds what doctors consider normal, or if there are other side effects, it may be a symptom of GERD.

If left untreated, GERD can have long-term effects on growth and development.

Keep reading to learn more about the symptoms of pediatric GERD, treatment options, and when to seek help from a healthcare professional.

GERD is a very common digestive disorder in which stomach contents flow into the esophagus, irritating the esophageal lining and causing pain that people generally call heartburn.

The is part of the digestive tract. It is a tube that delivers chewed food to the stomach. At the bottom of the esophagus is the esophageal sphincter, which opens and closes to allow food to enter the stomach. While this sphincter is also believed to prevent stomach acid from entering the esophagus, sometimes it can fail, causing heartburn or GERD.

Infants, especially premature babies, have an increased risk of this acid reflux into the esophagus due to the physiological immaturity of their esophageal sphincter.

Gastroesophageal reflux disease (GERD) is common in children under 2 years old. shows that GERD occurs in about 50% of infants under 2 months, 60-70% of infants 3-4 months, and 5% of children 1 year old.

It is common for most infants to regurgitate frequently in their first few months of life, and this symptom is not of concern. In fact, many infants will spit multiple times a day, leading some to describe them as “happy spitters”.

However, GERD can develop into GERD in infants when it persists long term, which can affect weight gain, development, and quality of life. Approximately of infants exceed normal GERD by 12 months of age. However, if these symptoms persist after 18 months, it is likely that GERD is the cause.

Pyloric stenosis is another condition that causes frequent vomiting in infants. However, unlike those with GERD, infants with pyloric stenosis will have violent vomiting, called projectile vomiting. The reason is that the pylorus, the channel between the stomach and the intestine, becomes narrow. This condition requires surgical treatment.

Certain conditions increase the risk of GERD in and . These include:

In addition to spitting frequently, infants and children with GERD may have the following symptoms :

It is important to know that these symptoms are not only specific to GERD, but can also be the result of other conditions related to early childhood, such as:

As several factors can contribute to the causes of these symptoms, it is important to see a doctor for a diagnosis and to put in place an effective treatment plan.

If GERD is not treated in an infant or child, they will likely have difficulty gaining weight, which will lead to a lack of normal physiological and neurological development.

Some towns to determine if an infant or child has GERD include:

studied the use of GERD PPIs, including lansoprazole, esomeprazole, rabeprazole, pantoprazole, and omeprazole, to help reduce crying, agitation, coughing, regurgitation, and vomiting.

However, the researchers concluded that PPIs are no more effective than placebos in reducing symptoms associated with GERD. Therefore, doctors do not currently recommend PPIs as a treatment for infants with GERD.

Histamine 2 receptor antagonists, such as ranitidine, are an alternative treatment option.

Doctors may also suggest surgical treatment if other treatments are ineffective. The most common surgical treatment is fundoplication, which involves wrapping and stitching the upper part of the stomach – called the fundus – around the esophageal sphincter. However, because this procedure is invasive, scientists and healthcare professionals are looking to develop other less invasive treatments for infants and children.

Pediatric gastroesophageal reflux disease, or pediatric GERD, is a common digestive disorder that affects infants and children. This disease involves the backflow of stomach acid into the esophagus, causing irritation and pain called heartburn.

GERD is common in infants, but the vast majority of children get past it by the age of 1 year. If children have these symptoms after this age, they may have pediatric GERD.

Parents or caregivers of a child who has frequent regurgitation and feeding problems should see a pediatrician.