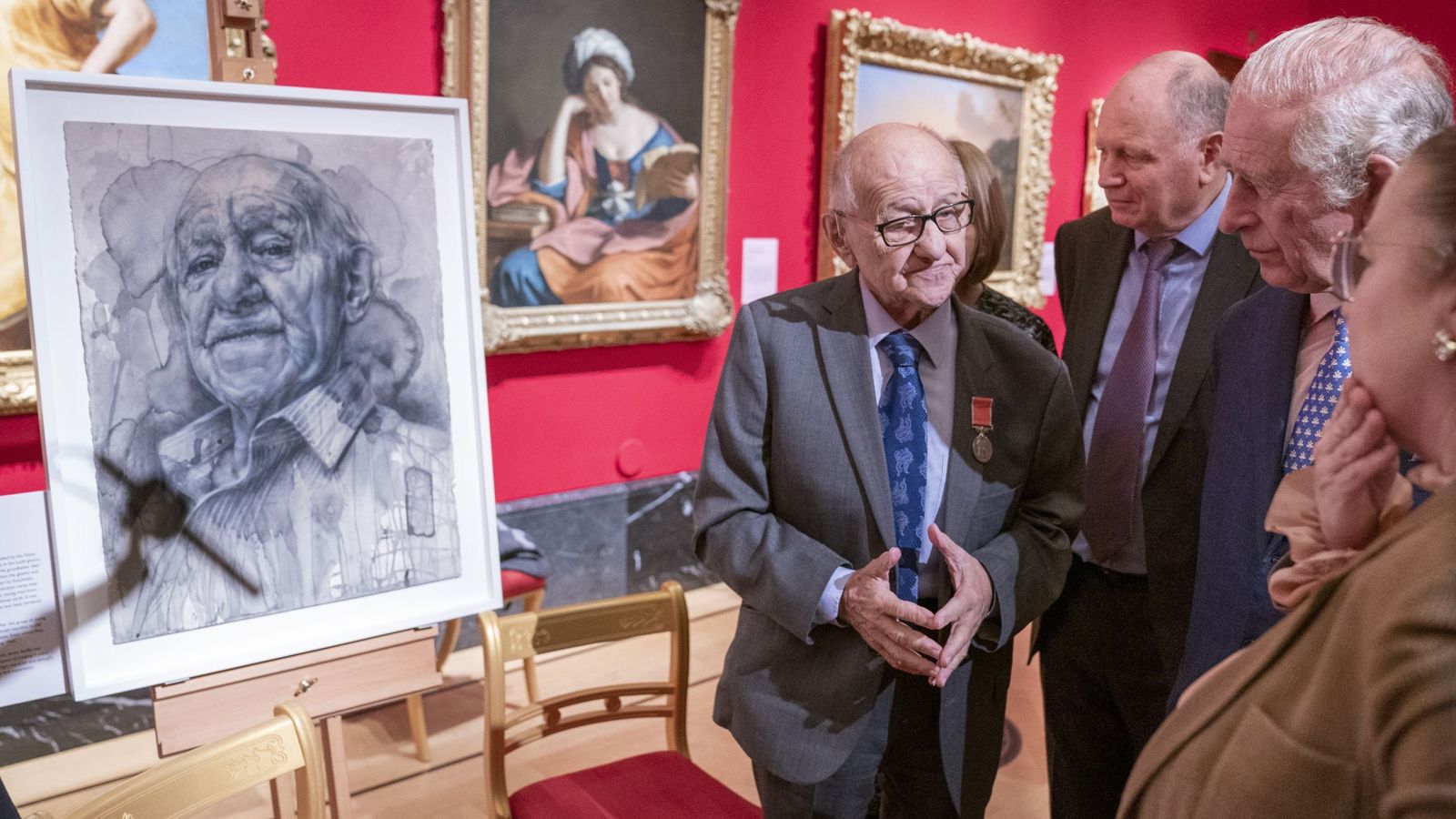 Prince Charles hailed seven portraits of some of the UK’s last Holocaust survivors as “powerful testimony” to their lived experience.

The paintings, depicting elderly men and women, were commissioned by the Prince of Wales serve as a lasting reminder of the horrors of the Nazi regime.

As the work was unveiled at the Queen’s Gallery in London before Holocaust Memorial DayThe heir to the throne was moved by a survivor who rolled up her sleeve to reveal a concentration camp tattoo.

Lily Ebert, 98, also showed the prince a gold pendant which she hid from the camp guards in her shoe and her daily ration of bread.

She said to the prince, “Meeting you is for all who have lost their lives”, and Charles replied, “But it is a greater privilege for me”, and touched her shoulder.

In July 1944, 20-year-old Mrs. Ebert, along with her mother and five siblings, were transported to Auschwitz.

His relative and some of his siblings were sentenced to death in the gas chamber after meeting the infamous Josef Mengele, known for his experiments on those in the camp, while the other family members were put to work .

Speaking of her angel-shaped pendant, she said: “This necklace is very special. He went through Auschwitz and survived with me. Auschwitz took everything, even the gold teeth that they took out of people. But it survived.

“I put it in the heel of my shoe but the heel wore out so… I put it in the piece of bread we ate every day. So that’s the story. I had five years old when I got it from my mother for my birthday.

“They arrived and they saw Dr Mengele, he took them straight away. I’ve been wearing my collar every day since I survived.”

A reminder of the ‘depths of depravity’ people can fall into

In the preface to a catalog accompanying the exhibition, Prince Charles wrote that we are all “responsible for each other, for our collective history”.

He added: “One of the starkest reminders of this was the Holocaust, when a third of Europe’s Jews were brutally murdered by the Nazi regime as it sought to extinguish not only the Jewish people , but Judaism.

“Seven portraits. Seven faces. Each a survivor of the horrors of those years, who sought refuge and a home in Britain after the war, becoming part of the fabric of our nation.

“However, these portraits represent much more than just seven remarkable individuals. They are a living memorial to the six million innocent men, women and children whose stories will never be told, whose portraits will never be painted.”

The prince went on to say that the portraits “represent a permanent reminder” of the “depths of depravity and evil into which humanity can fall when reason, compassion and truth are abandoned”.

Who else is featured?

The exhibition also features a painting by Helen Aronson, who was part of a group of about 750 people released from a Nazi-run ghetto in Poland out of 250,000 people sent there.

“The portrayal was just excellent, absolutely true to life. It was such an experience,” she said. “It was a very special and unforgettable day.”