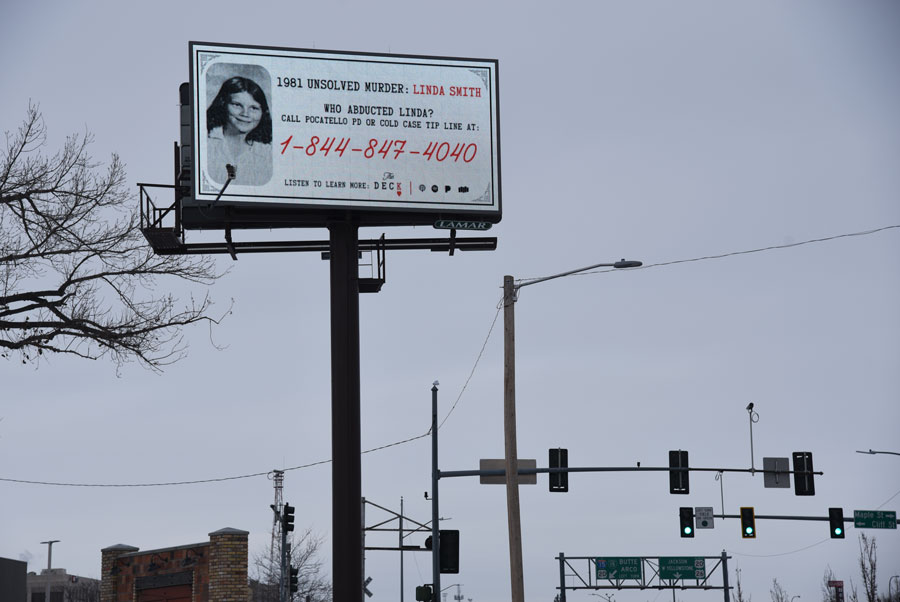 “The Deck” debuted on streaming services Wednesday with two episodes of around 30 minutes each. One of the two episodes features the story of Linda Smith, a 14-year-old Pocatello native who was abducted from her home and killed in 1981.

The only family member at home with Smith at the time of her abduction was her 9-year-old brother, Ben, who was interviewed for the podcast.

Ben spoke to EastIdahoNews.com, saying he hopes the new eyes cast on his sister’s story by the podcast will bring information to the forefront that could finally produce a suspect and bring closure to his family.

“They did a really, really good job with it. I was really happy,” he said. “They even paid to have billboards put up in Idaho Falls and Pocatello.”

The billboards were paid for by the podcast’s production company, Audiochuck, an Indianapolis-based media company that also produces popular podcasts such as “Crime Junkie” and “Anatomy of a Murder.” The company’s founder and CEO, Ashley Flowers, also hosts the show.

In an introduction to each of the first two episodes, Flowers says this podcast is something her company has been working on for years.

As she explains, “The Deck” refers to a deck of cards that are distributed to prison and prison inmates, complete with photos and information regarding cold cases – one for each of the deck’s 52 cards. The hope of these card games is to encourage those who have information that could lead to solving the case to come forward.

RELATED | She was murdered nine years ago. His family hopes a card game will find the killer

Because Smith was treated as a runaway by police until the remains found 11 months later were identified as hers, the crime has yet to be solved. A major point of contention in the podcast is how the case was handled by Pocatello police, who declined to speak on the podcast.

When asked if he thought the podcast’s critical treatment of the department’s handling of the case was fair, Ben cut in.

Pocatello police did not respond to inquiries from EastIdahoNews.com regarding the case.

Police were quick to dismiss the crime because, at the time, southeast Idaho didn’t have many similar crimes, Flowers says in the podcast.

According to the card that bears her photo and information, Linda was taken from her home on the 200 block of North 8th Avenue by a Caucasian adult on June 14, 1981. A week later, clothing identified as belonging to Linda by his family were found scattered near the Pocatello Creek Road exit ramp. Then in May 1982, his remains were found near Hospital Way and East Center Street.

Linda’s card features a photo of the teenager, described by Flowers as a picture from the college yearbook.

According to the podcast, Linda was the eldest of three children. The night she was abducted, Linda was babysitting Ben while their single mother was out with friends — a rarity, Flowers says. Their 13-year-old sister was out of town, spending the night with her grandparents in Basalt.

In an interview for the podcast, Ben explains that he had fallen asleep watching television with his sister. And when he woke up, he saw a man clinging to his sister with both hands running away through the back door of the house.

Ben tried to chase down the intruder and save his sister, but was pushed into a bush and, according to the Deseret News, was told to “run away or I’ll get hurt”.

Ben ran to a neighbor and called 911, Flowers said. He remembered little of the man, only that he had a beard, wore a jacket or sweatshirt with the hood pulled over his face, and drove a black pickup truck with flames painted on the sides. Ben also described the man as smelling the combination of alcohol and body odor.

Help didn’t arrive with the Pocatello police, Flowers says in the podcast.

“They had two very inexperienced patrol officers investigating a possible kidnapping that they thought was a runaway,” Ben said in the podcast. …”Not once did they believe I saw someone take my sister.”

Officers insisted Linda left alone, possibly to attend a nearby party, Ben said. They tried to convince the boy that ‘his 9-year-old imagination was getting the better of him’ or that he was simply trying to cover for his sister who had left him alone.

Even when clothes identified by the family as belonging to Linda were found a week later, Pocatello police did not believe a crime had been committed.

It wasn’t until bones found nearly a year later in the Sagewood Hills area near Portneuf Medical Center were identified as Linda’s using dental records that the case was ruled a criminal.

By then, any opportunity to gather evidence had passed, as had the all-important 48-hour window immediately after the abduction. Shortly after the kidnapping, the Smith family moved out of their home and out of Pocatello.

“There is little information about what exactly happened in the police investigation immediately following Linda’s abduction on June 14, 1981,” Flowers says.

Nothing came of the investigation that followed the discovery of Linda’s remains.

When the cold case was reopened in 2007, Ben said the family was alerted to two persons of interest identified by detectives. But, again, nothing came of it.

Ben told EastIdahoNews.com that over the past 40 years he’s dealt with a “revolving door” of about 16 detectives who have offered the family evidence finds on rare and widely spaced cases.

Now, he’s cautiously optimistic that a wildly popular podcast could bring the case some needed attention. Yet the thought of losing his sister the way he did still haunts him.

He told EastIdahoNews.com that at first he didn’t want to be part of the new podcast, eventually agreeing to participate in the hope that his participation would help. And when he heard a trailer for his sister’s episode, he got emotional. Eventually he was able to listen to the entire episode, but he needed help doing so.

“I had to listen to it with a friend and my son,” he said. “I figured if I was going to listen to the podcast, I had to be with someone.”

Ben said there was one minor point that he felt was misrepresented by the podcast.

In the podcast, it is stated that the remains of two other victims of similar crimes were found in the area near Linda’s. In fact, Ben explained, these remains were found in a cave in Oneida County, about 50 minutes from Pocatello.

“For the most part,” he said, “I was really happy with how it turned out.”