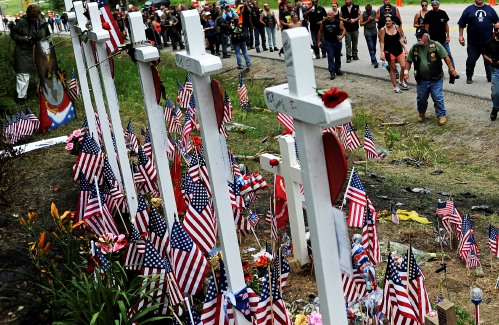 Should NH crack down on roadside memorials?

You’ve seen them while driving down the highway: wooden crosses or other homemade roadside memorials commemorating someone who died in a car accident. These memorials occupy a legal gray area in New Hampshire, but that hasn’t stopped them from becoming commonplace and increasingly ornate. A bill in the Legislative Assembly would crack down on roadside memorials and order Department of Transport employees to dispose of them 90 days after the incident.

Under RSA 236:29, the Department of Transportation has the authority to clear obstructions from most types of New Hampshire freeways. However, it is not always clear what constitutes an “obstruction”. Of course, if someone erects a large granite monument to a loved one along a state highway, that would clearly count as an obstruction, as it could block the driver’s view and cause injury if someone one crashed into it. A wooden cross is not so clear.

According to the New Hampshire Department of Transportation, the law is simply not explicit enough. As you can imagine, the family members who created these memorials are often outraged when DOT employees remove them. The Department believes that HB 1553 could clarify the rules regarding roadside memorials and reduce such disputes.

Rep. Daniel Eaton (D-Stoddard), who is sponsoring the bill, argues roadside memorials in New Hampshire have gotten out of control. While the tradition of marking a fatal crash site with a wooden cross dates back decades or more, it has become more common to make permanent roadside memorials, complete with battery operated lights, compositions artificial florals and other accessories. Rep. Eaton and other supporters of the bill say these memorials pose a safety hazard for a number of reasons. On the one hand, they disturb drivers. Additionally, they often result in cars parked on the side of busy roads while family members tend to monuments, putting them at risk of being hit by passing cars.

There are other arguments for cracking down on roadside memorials. They make it more difficult for road crews to mow and maintain the area around the road. They can also cause messy situations in which DOT workers become the “bad guys.” For example, imagine an accident on a highway where a drunk driver causes an accident, killing another driver. Next, both families want to erect memorials to their deceased loved ones; one commemorating the drunk driver and another honoring the victim. Ultimately, the DOT is then brought into the middle of the dispute.

During the Senate Transportation Committee hearing on this bill, some senators took issue with the bill as written. For example, Sen. David Watters (D-Dover) argued that the DOT already has all the authority it needs to take down roadside memorials. He also pointed out that the bill seems somewhat contradictory; if these memorials are banned, why shouldn’t they be removed immediately rather than waiting 90 days?

Finally, Senator Watters pointed out that the text of the bill reads: “The Department of Transportation will remove and dispose of any roadside memorial after 90 days.” Using the word “shall” rather than the word “may” could create problems for the DOT if it does not remove the monuments as required by law.

Although this problem may seem trivial, many granite staters are lit from both sides. Some believe that roadside memorials have become increasingly conspicuous and even dangerous, and believe that HB 1553 would solve the problem. Others believe they are an important and moving reminder for all motorists to drive carefully. Regardless of your side, you can tell your state senator how you think they should vote on HB 1553. To get started, visit citizencount.org/elected-officials to find out who represents you and how to contact them.

Citizens Count is a nonprofit organization serving the New Hampshire community by providing unbiased information about issues, elected officials, bills, elections, and candidates. These articles are shared by partners of The Granite State News Collaborative. For more information, visit collaborativenh.org.

So… WHAT IS A WOMAN?