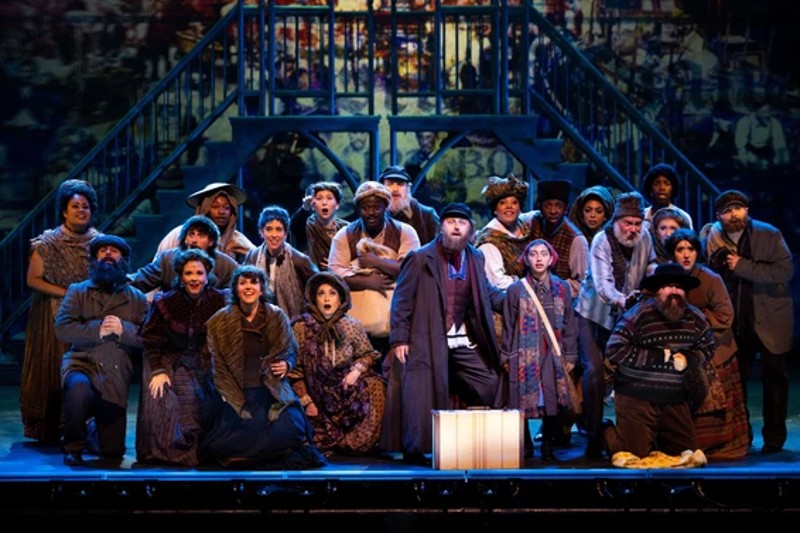 Inevitably, they are forced to interact – for better or for worse.

It is also the history of America.

Although the action takes place in New York at the dawn of the 20th century (1902-1912), more than 100 years later, the stakes remain the same: the even greater gap between the haves and the have-nots; wage and gender inequality; intolerance of ‘difference’, be it skin color, religion or country of origin; the hideous specter of racism, sexism, classism and the ever-elusive (if it really existed) the American Dream.

I first fell in love with the musical in 1997 when it toured Los Angeles before it opened on Broadway, where it was nominated for 12 Tony Awards (it won four). I loved Tony’s winning score with its varied and evocative music by Stephen Flaherty and its fiery and earnest lyrics by Lynn Ahrens. The book was written by famous playwright Terrence McNally. I cried several times.

I had the same reaction when I saw it at Moonlight Amphitheater in 2002, and twice in other venues in San Diego.

Now, “Ragtime” returns to the Moonlight, in a huge production, with a cast of 38 and a pit orchestra of 26 (under the assured direction of Elan McMahan).

For the first time, I didn’t cry, despite the shocking topicality of the play. It’s such a powerful story.

The cast and vocals are wonderful. But director John Vaughan and his design team seem to have been less concerned with the emotional connections between the characters than with the “business” surrounding them.

The large, ever-changing projections (Blake McCarty) are almost hyperactive, a combination of archival film footage on the nose and blurry, arty, amorphous stills and color washes. Even the overall image, the Statue of Liberty, is abstract, though squarely framed by Emma Lazarus’ immortal words that rest on a plaque at its base: “Give me your weary masses, your poor, your huddled masses who yearn to breathe freely.” If only.

The three disparate communities are represented by three families.

The face of the immigrants is the ambitious young widower, Tateh (Geno Carr, longtime La Jolla and Broadway cast member of “Come From Away”), whose Latvian name is too hard to pronounce for everyone calls him by the Yiddish word for Father. His mostly silent daughter, The Little Girl (Leila Manuel) also doesn’t have a name.

But the main black characters do.

At the center of the major action and conflict is skilled pianist Coalhouse Walker, Jr. (Vista native Charl Brown, who cut his teeth theatrically, like his idol, original “Ragtime” star Brian Stokes Mitchell, at the San Diego Junior Theater. Twenty years ago, Brown dubbed the coveted role of Moonlit Coalhouse. Now he owns it).

Coalhouse, a well-known womanizer, falls in love with Sarah (Brooke Henderson), but she feels abandoned and never tells him they have a son. When he searches for her in New Rochelle (where she and the baby were cared for by her mother), driving her new Model T Ford, the cultish Irish firefighters pursue him with a vengeance.

Thus begins Coalhouse’s tireless quest for justice, which results in two black deaths – at the hands of law enforcement. An all-too-familiar story.

But what about relationships? They sit in the back. The tension between mother and father as she gains self-confidence and independence; the palpable love between Sarah and Coalhouse. And a love later, more surprising. They have never been so pronounced.

Philosophical perspectives clash and sometimes converge in unexpected ways. But justice is not done.

With minimal props and sets (stage design by Kevin Depinet, lighting by Jennifer Edwards, sound by Jim Zadai, costumes designed by multiple Tony Award winner Santo Loquasto, locally coordinated by Heather Megill), two oversized stepladders on wheels are careened around the scene, moving characters and actually interfering with their romantic relationships (it’s the most intrusive in Coalhouse and Sarah’s reunion).

Visual clutter leaves little room for multiple ideas, people and relationships. No room for tears here, though you might well cry for our country (the many forms of “patriotism” are on display, as they are in the daily news).

Clearly, the audience understood the messages – and their relevance. They gasped. They clapped. You too.

Pat Launer, member of the American Association of Theater Critics, is a longtime San Diego arts writer and Emmy Award-winning theater critic. An archive of his previews and reviews can be found at patlauner.com.

Who is Louis Cato, the new conductor of the “Late Show”? |