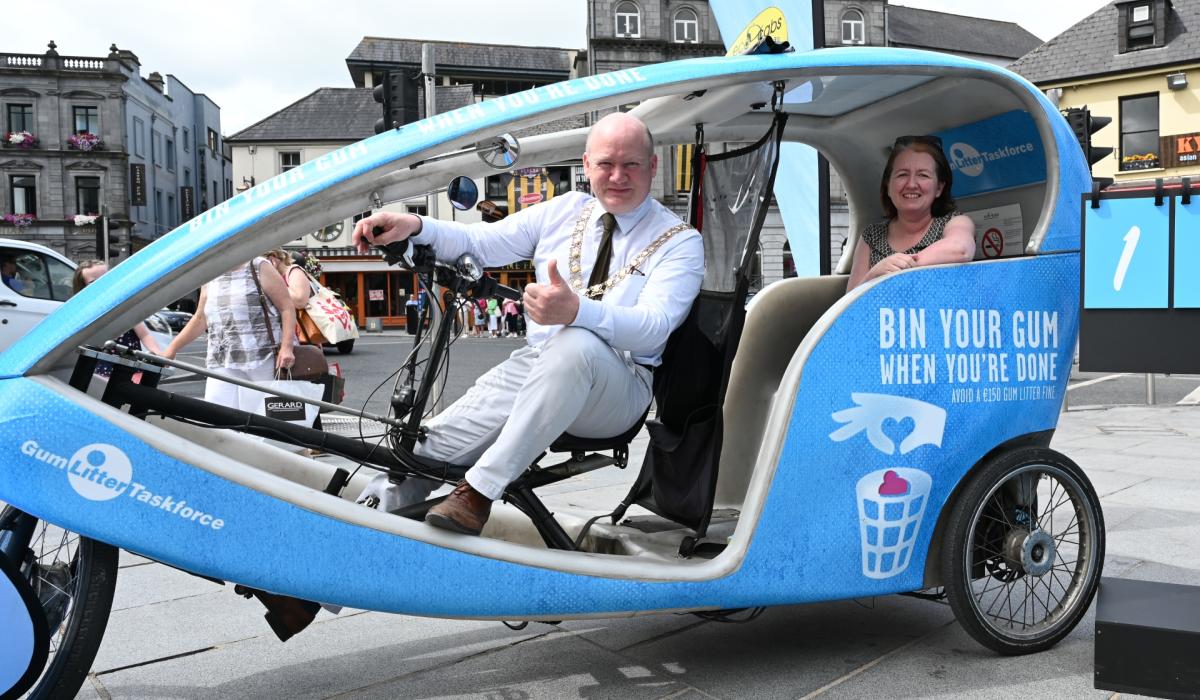 Ireland has seen a remarkable 70% reduction in chewing gum waste since 2007 and chewing gum waste now accounts for just 8% of all waste, down from over 26% in 2007 – thanks to the efforts of the Gum Litter Taskforce campaign. The message of the ‘Throw away your chewing gum when you’re done’ campaign seems to be resonating with the Irish public with positive results for the country’s streets.

Ireland has achieved a 70% reduction in chewing gum waste since 2007, according to the Gum Litter. Taskforce (GLT), the national awareness campaign to make chewing gum waste a problem of the past. The GLT roadshow visited the city of Kilkenny last week to engage the public through its fun roadshow which saw the Mayor of Kilkenny, Cllr David Fitzgerald shoot some hoops with the Gum Litter Task Force team on the parade.

Cllr Fitzgerald said: ‘Welcome to the Gum Litter Taskforce Street Team in Marble City as this is a great campaign that has helped reduce gum litter. The fun campaign and interactive display here today is a great way to promote an anti-littering message. Kilkenny City works hard to keep Marble City litter free, but chewing gum litter can be a nuisance,
especially on the Parade, as chewing gum can impact the beautiful limestone pavement. I support this campaign to encourage people to dispose of their chewing gum responsibly.”

The Gum Litter Task Force has brought about a phenomenal change in people’s attitude towards gum litter. The awareness campaign also increased awareness of the fine associated with chewing gum litter, with 81% of those surveyed after the campaign now aware of the €150 fine. However, just over one in four (27%) say they have never dropped gum, highlighting the continued importance of this awareness and behavior change campaign, especially for future generations.

Acting Director of Environmental Services Denis Malone, who was present with the Mayor, said:

“Kilkenny County Council is delighted to support the Gum Litter Task Force. By continuing to engage with people and educate them about the harms of chewing gum litter, we can work to make chewing gum litter on the streets of Ireland a problem of the past. We especially welcome the “Bin It!” school roadshow that encourages students to dispose of waste responsibly, and in particular gum waste, through workshops led by actors. Educational engagement and the encouragement of positive behaviors from an early age will have long-term positive effects on attitudes towards litter. The Gum Litter Taskforce complements many of the Council’s objectives set out in the Waste Management Plan 2021-2023”.

The Gum Litter Taskforce campaign, which is funded by Mars Wrigley, will run for a fifth cycle through 2025 thanks to a remarkable 70% reduction in gum litter since the initiative began in 2007. The campaign has engaged with more than 30 local authorities. across the country, organizing awareness initiatives and localized kick-off events and providing materials to promote community action on gum waste. The gum litter task force the ‘Bin It!’ The education program will travel across the country and present 60 performances per year in primary schools across the country, with the ambition to visit 180 schools by 2025.

Fly high in the ‘marquee’